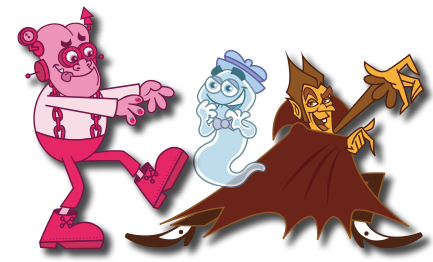 Count Chocula, Franken Berry, and Boo Berry were brands that sold well around Halloween, but not enough sales year round to sustain television advertising. To bring them back into the public’s consciousness, we developed a licensed product strategy that would place them outside the cereal box. We knew that these iconic characters could carry other products besides cereal, so we redesigned the characters to be more in keeping with their classic origins and developed a new style guide that was used on everything from toy packaging to T-shirts and racing jackets. The revamped characters, together with the style guide, attracted new partnerships, including NASCAR and Hot Wheels. The new, fresh designs on the cereal boxes generated buzz and led to Target stores carrying the brand in a big way during their peak season. A new animated music video featuring original audio from 45 vinyls from the backs of 1979 cereal boxes was created. That led to the CD Spooky Sounds From Count Chocula Castle, sold in Target stores during the Halloween season.